WE ARE STILL ALIVE AND RUNNING!

Adelaide Retro Computer Group is still running and has been since December last year.  We are still hosting monthly events at Unley Libraries and have no plan of stopping.

Since the change of admins,we work primarily from our facebook page now. We also have a brand new website in the making.

This blog will be deleted permanently within the next few weeks.

The ARC Team
https://www.facebook.com/adelaideretrocomputing/
Posted by ARC at 17:52

Thanks to everyone who made it out on Friday night for our end of year BBQ! It was a diminished crowd due to the confusing circumstances and changes to the format but despite the difficulties I think for those who attended it was a fun night of good food and good company.

Unfortunately we simply didn’t have enough ticket sales to hold the quiz in its planned form, so it will probably be happening next year instead (perhaps as part of a regular monthly meet-up). Those who purchased tickets for Friday’s event have been refunded in full.

As some of you know, due to life and work commitments, I’ll be retiring from most of my ARC duties at the end of this year. Those duties included being the event photographer and maintaining this blog. I will still help out with event set up and graphic design etc when possible. I will also continue to maintain the ARC tumblr account. I’ve really enjoyed my time with the group this year, and I’d like to thank everyone for helping us build it over the last 12 months. For a little town like Adelaide we really punch above our weight!

We are pleased to announce that Matthew Gibb, Jon Peate, and Emmanuel Photakis have joined Nick Tiago and Ewan Wood to form the ARC committee for 2019. Thanks guys! I’m sure you’ll do an awesome job.

This will likely be our final post here. Group announcements from now on will happen exclusively on our Facebook page. We think this is the most efficient way to keep you informed going forward.

So with that I’d like to wish you all a merry Christmas, a wonderful 2019 and happy retrocomputing!

Signing off for now..

Unfortunately due to insufficient ticket sales, we have decided to postpone the quiz until next year. Please refer to Nick’s facebook post about tonight’s event. Our apologies for the inconvenience.
Posted by Dan at 13:05

Just a quick reminder about this Friday's BBQ and Quiz. Today's your last chance to get tickets.

During the last twelve months I’ve been lucky enough to acquire a couple of North American NTSC Amigas. What has been particularly interesting to me are the subtle differences between these machines and the PAL Amigas we all grew up with here in Australia. Of course the first obvious difference is the faster refresh rate: 60Hz instead of 50Hz. Not only is scrolling and animation sped up but often the music too. The other key difference is the display height. And it really is quite a difference.

If you’ve ever run North American software on your PAL Amiga, you might have wondered why some graphics appear to look ‘squashed’ or ‘shortened’. In the King Tut example below, the original full-height NTSC image is juxtaposed with the ‘squashed’ version typically displayed on PAL systems and emulators.

Low resolution mode (as used by many games) was 320x200 for NTSC Amigas and 320x256 for PAL Amigas. Back in the day most users would stretch the image vertically using the analogue controls on their 4:3 CRT monitor to fill the screen. This meant that artwork created on NTSC Amigas would generally look squashed on PAL Amigas - faces would appear wider, figures would look noticeably shorter. (The problem is further compounded by modern 16:9 widescreen displays that widen the image even further - but that’s a discussion for another day!)

For some glaring examples check out Defender of the Crown, an American game with superb artwork by the legendary Jim Sachs. Jim painted the art on his NTSC Amiga using non-square vertically stretched pixels. On PAL systems, and indeed emulators that default to 1:1 pixels, such artwork will look ill-proportioned.

Another example is the famous boing ball demo which is looking a bit squashed here on my PAL A500.

One of the ways around this is to boot your machine into NTSC display mode when running software that was created in North America. If you have a later model Amiga running OS 3.x hold down both mouse buttons during boot-up and select NTSC in the display options.

You’ll get a faster refresh rate and the graphics will display correctly.

There is also the controversial issue of many websites presenting NTSC graphics in 1:1 pixels. It's a complicated topic, but generally I’ve found the ‘5:6’ method is the best approach for preparing NTSC graphics for the web. Scaling up your 320x200 image by 5X on the X-axis and 6X on the Y-axis using nearest-neighbour interpolation will get you in the NTSC ballpark. It’s also non-destructive and easily reversible. Of course you should always save in a format like gif or png which have no destructive compression artefacts. 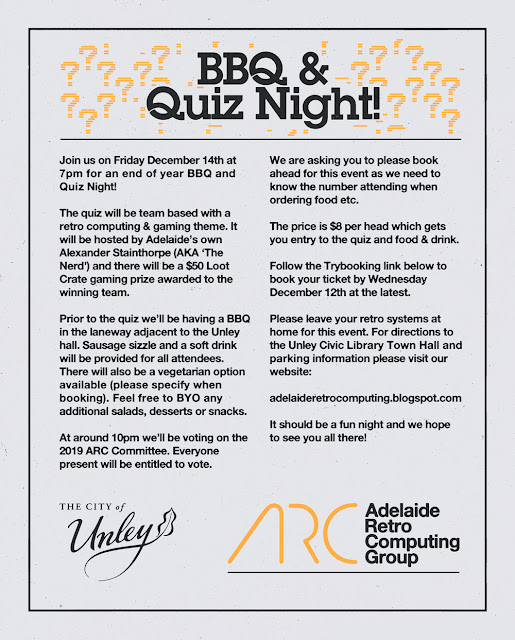 December’s event will be a combined BBQ, Quiz Night and AGM.

Please follow this link to book your tickets: https://www.trybooking.com/ZLYS

There is parking on Oxford Terrace and in the shopping centre carpark opposite. A map can be found here.

We look forward to seeing you all there!