November - It's an Atari Night!

Atari was the focus this month along with the usual "bring any system along" as we acknowledge there are others who do not own Atari's.

I will just mention that there is a fascinating movie on Netflix called "Atari: Game over."  It features the excavation of an old rubbish tip where it was rumoured for many years to contain the haul of Atari's ET cartridges.  ET, a video game based on the movie, did not perform as well and Atari was rumoured to have physically dumped the cartridges.  Please watch the film for all these details as I am not going to go through them further.

Back to the night of the meeting we were experiencing heavy rain fall with hail stones as large as ping-pong balls.  Quite unusual for this period where our weather has been fairly warm.  Sue and another person from the Community Centre was busy cleaning the conference room prior to our meeting as it had experienced a small degree of flooding.  Luckily from inspection after, the water had only dampened the carpet.

As always we begin at 7:30pm (or 7pm if people come to set-up their systems).  I acknowledge Epsilon here for these photographs.

As seen below, we had Atari's Galore! 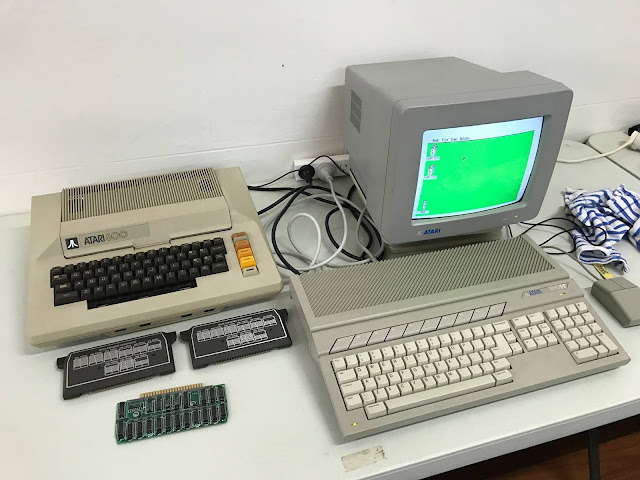 What?! A boing-ball on an Atari.  This demo certainly had a reaction both on the night and recently on our social-media page.  I was told that originally this demo was developed on the Atari and later ported to the Amiga 1000 as one of the original demo videos to see advertised on this system back in the day. 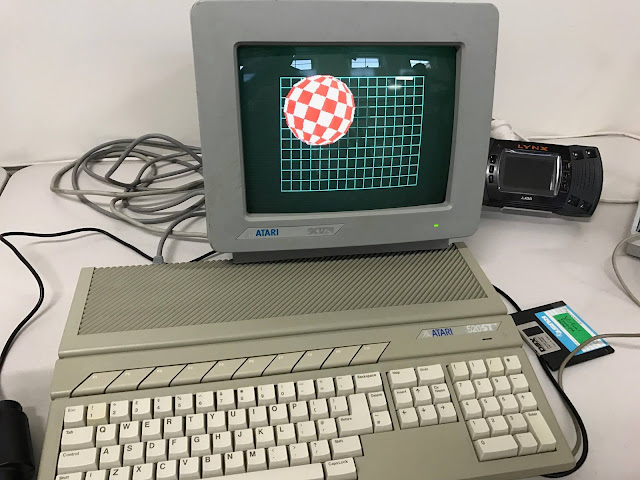 Ryan holding a Module from his Atari 800: 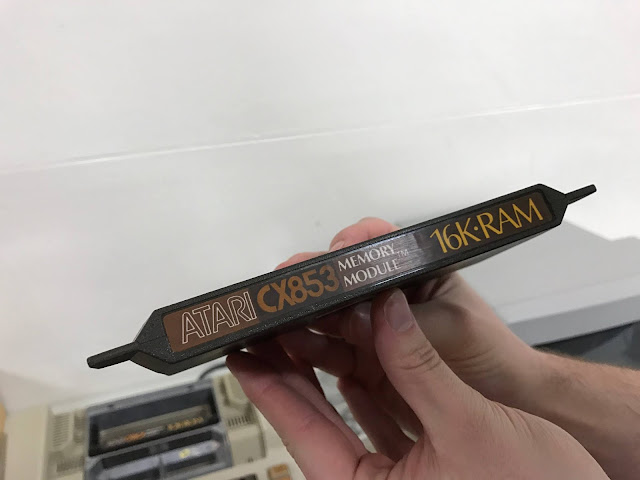 Lots of family fun gear here brought in by Paul.  Nice to see the original boxes!  Some real great art-work here if this tickles your fancy.  Video game collectors usually go mad over this stuff. 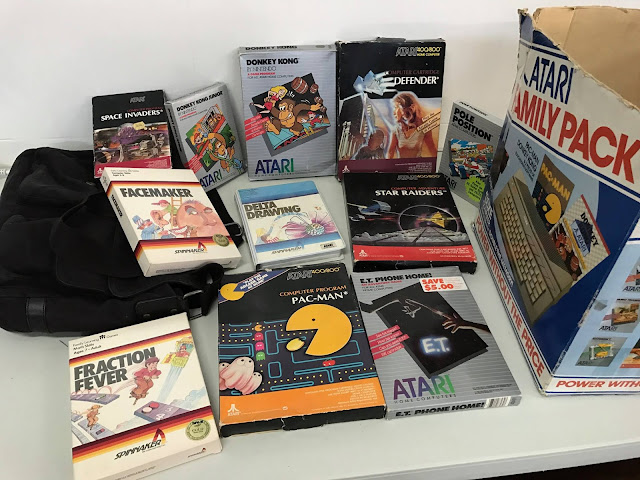 Ryan is currently restoring this machine to full functionality and was greatly assisted by Alexis on the night who along with Aron looked at the Schematics online and appropriately advised Ryan on which power-supply he can use (original power-supplies are not always available!). 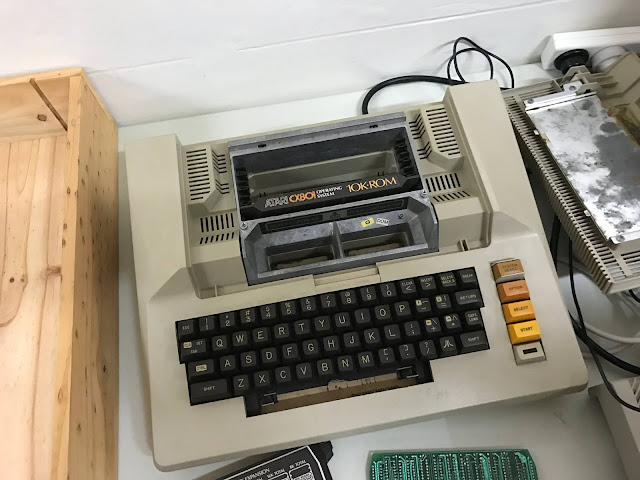 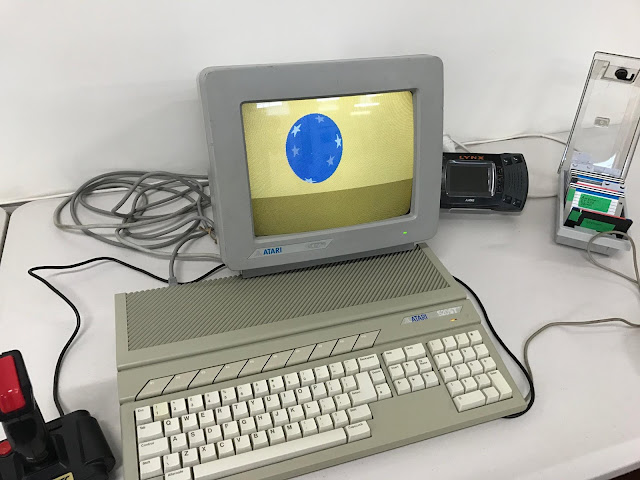 A new person to join us enjoying a classic game of Donkey-Kong below: 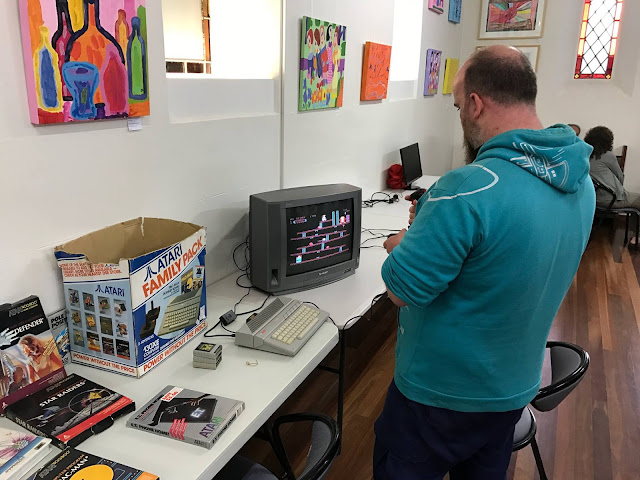 Some great conversations taking place here whilst watching others having a game: 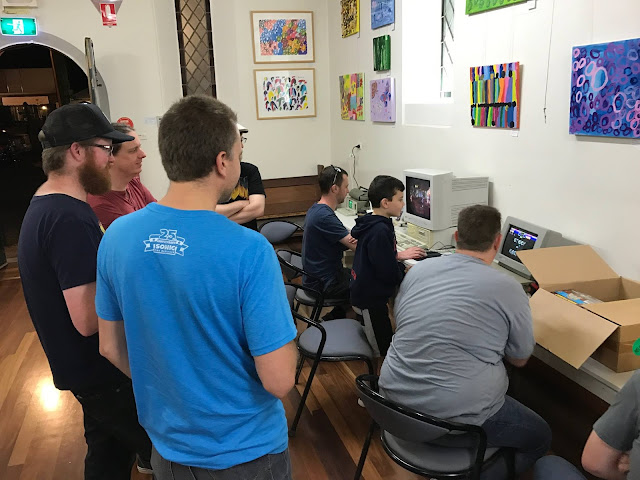 Paul Monopoli was here getting an old tube television connected with some help from Nathan. 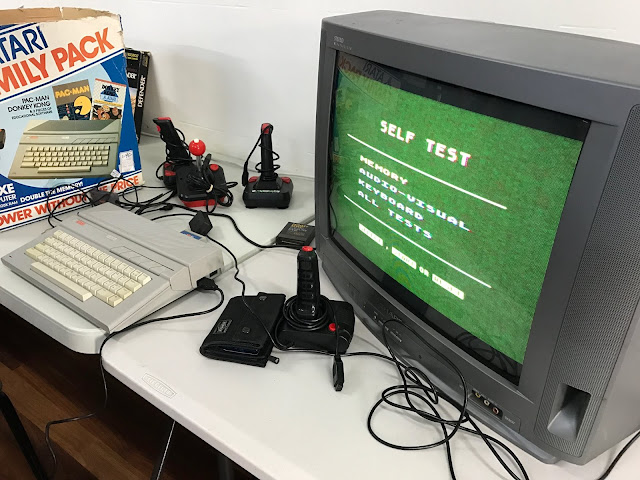 A hand-held Atari Lynx.  Not only on display but was played by people during the course of the evening.  Interestingly it was released in September 1989 and featured a colour screen.  Compare that to the Nintendo Gameboy released the same year which had a monochrome screen.  It took Nintendo 9 years after this before the Gameboy Colour was released. 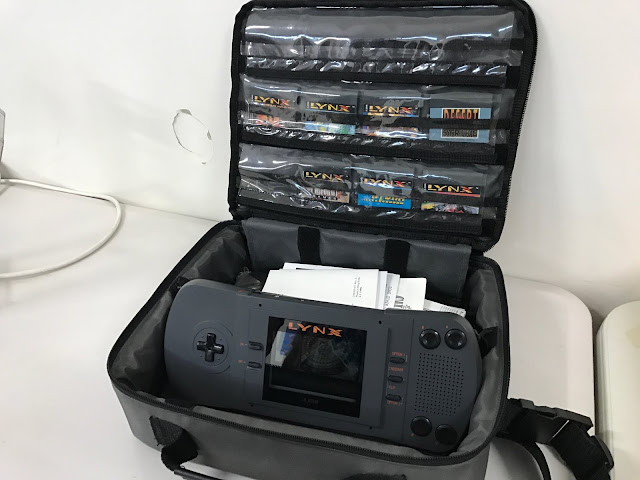 Some more chatter.  In the photo, Paul, Matthew, Andrew, Ryan and Aron (left to right). 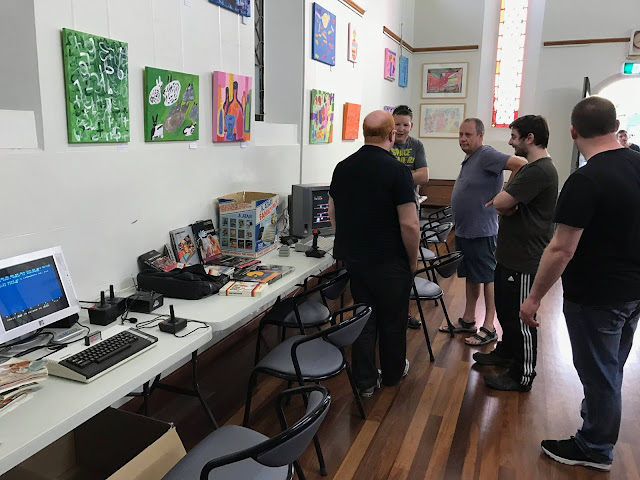 Another Atari brought in by Nathan Butcher: 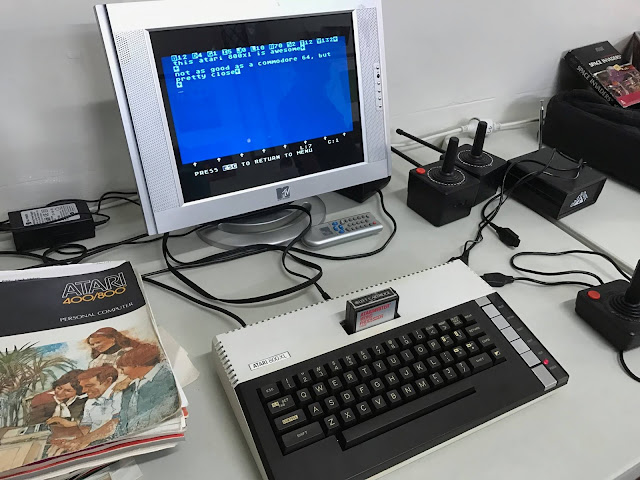 A shot here shows the array of machines in line: 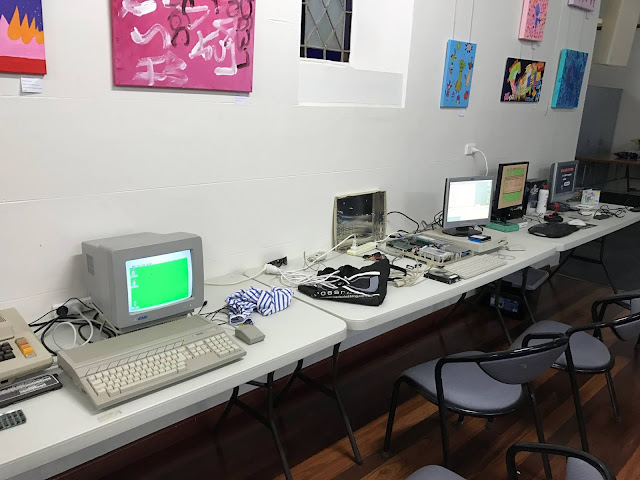 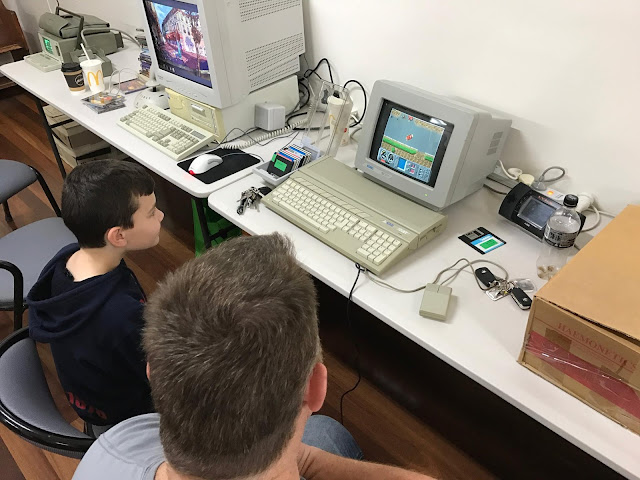 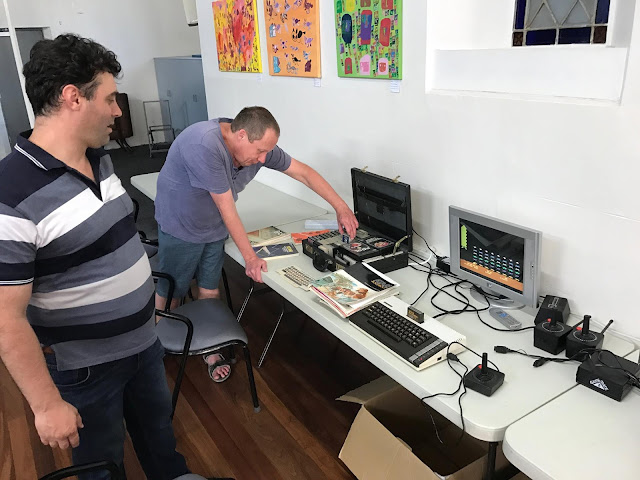 Now we turn to the other systems.

Below we have a unit that Aron brought in.  He explained it was a test/service machine for devices that incorporated the RS-232 plug.  In other words, many years ago our printers/modems/mice would have these plugs that would go into the slots on this machine for testing. 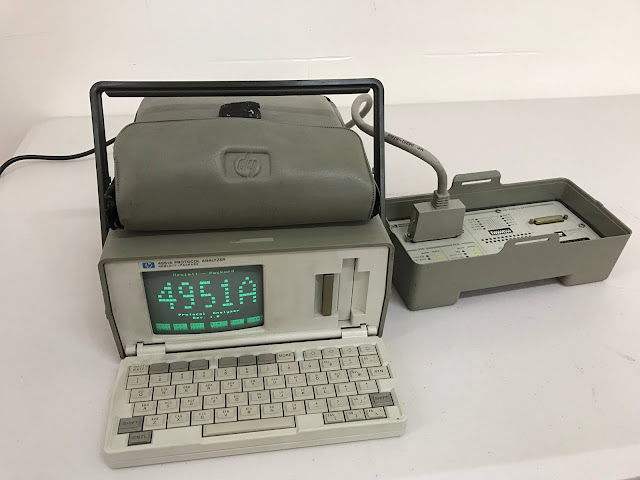 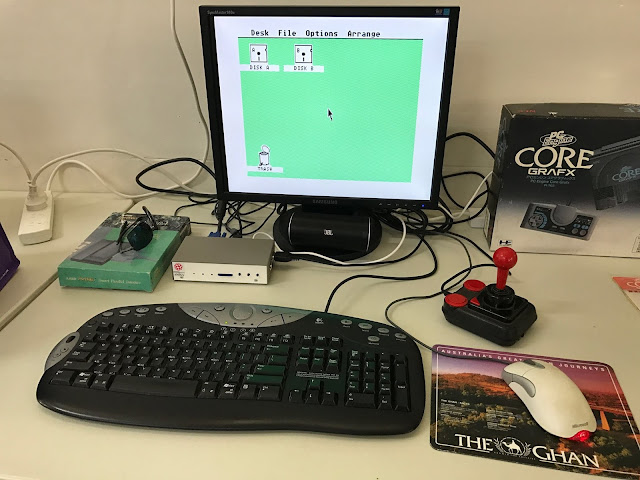 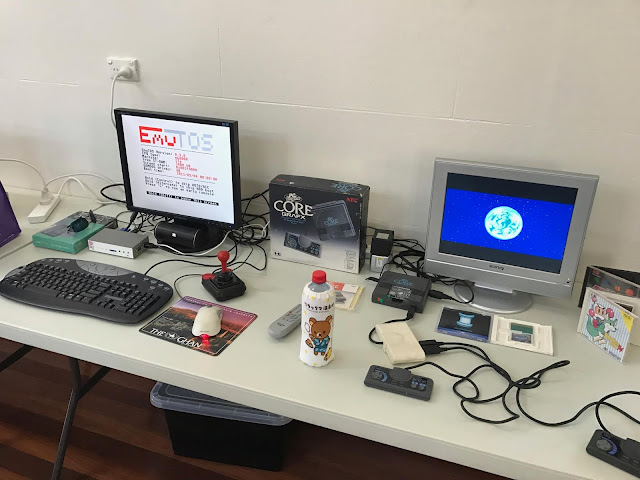 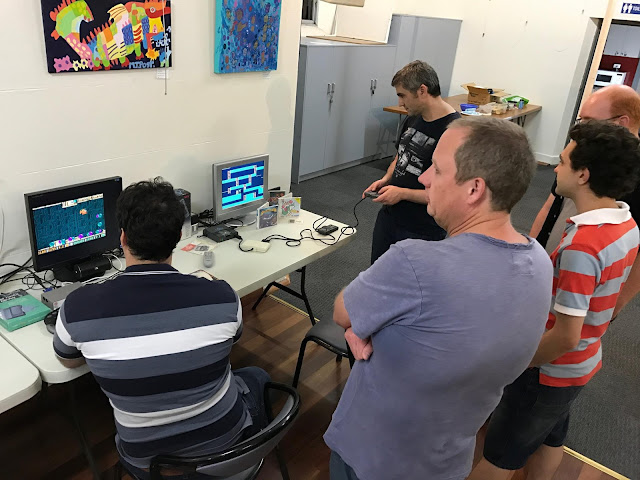 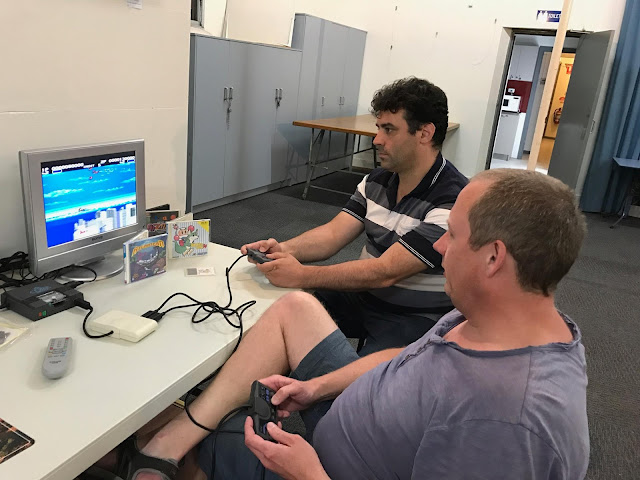 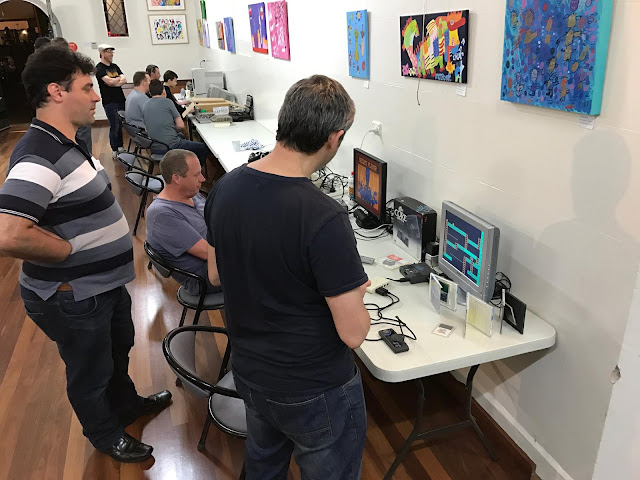 We also had a new person from Melbourne join us: 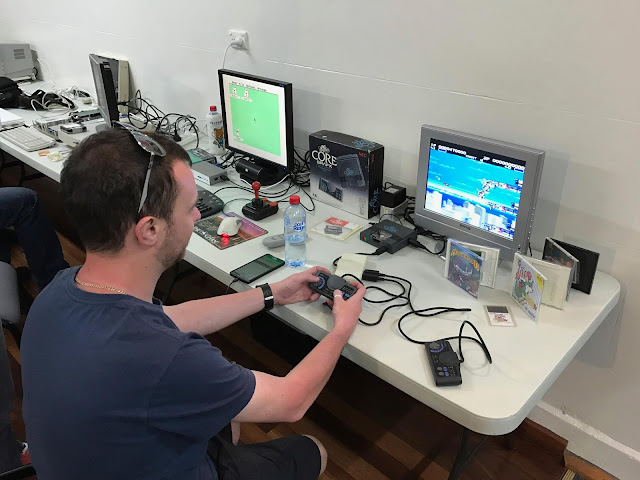 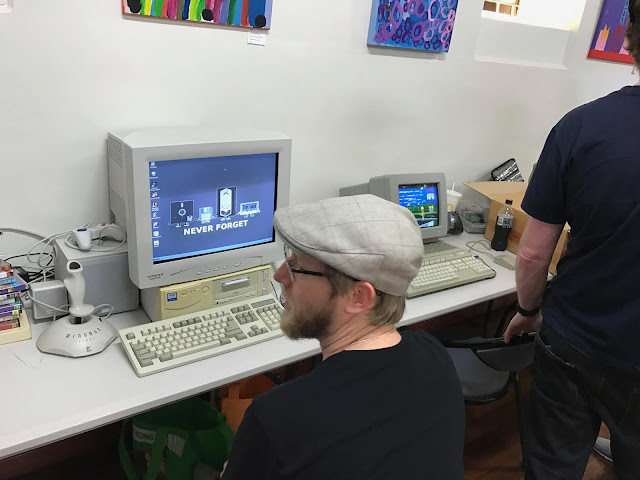 It was also nice to catch up with Paul Monopoli.  Paul is now the Editor of the new Gametraders Retro Live Magazine. 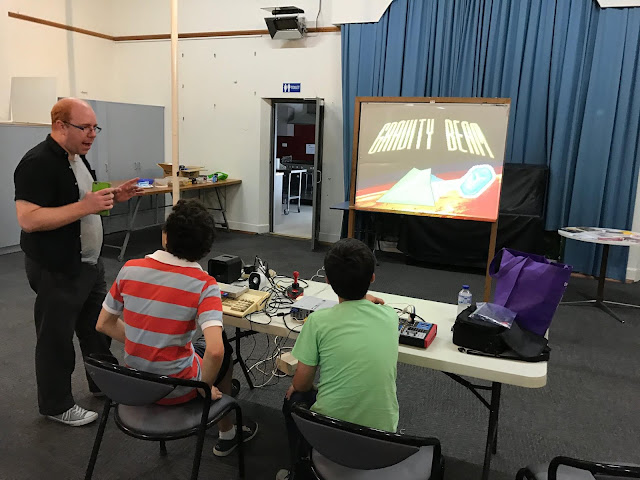 Issue 1 has been released as is available for viewing online here: https://issuu.com/gametraders
I believe that a hardcopies are available at Gametraders.

Theo Karagiris, a known Apple computer collector brought in this LC Pizza Box to load up: 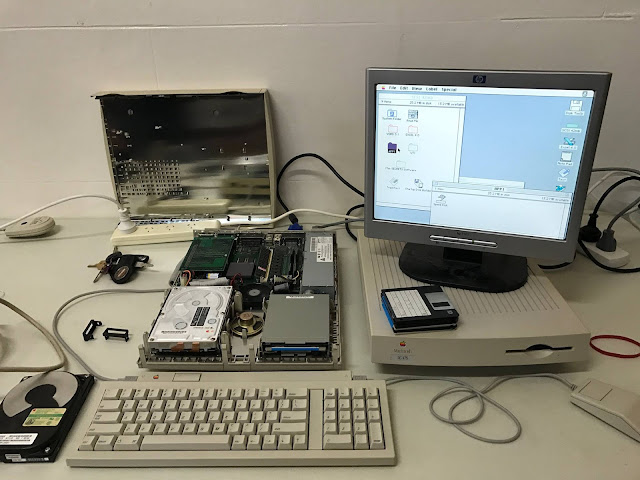 Below is an Amstrad LCD laptop type computer that was brought in. 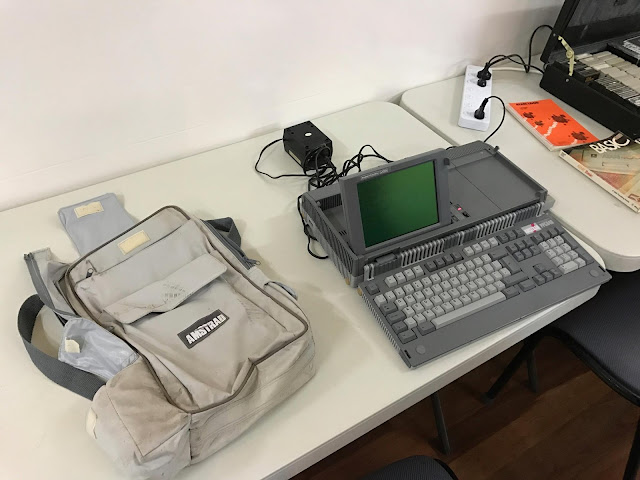 Thank you everyone again for a really excellent and enjoyable evening.
Posted by George at 11:53